How to make a PERFECT Lobster Roll 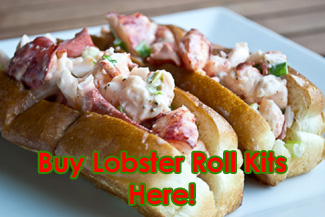 This is not a "recipe" per se but simply a rundown on the two basic ways we "Maine-ahs" prepare the perfect lobster roll. The first way (aka the "Red's Eats" way) is simply buttering and pan-toasting your hot dog roll, stuffing it full of lobster and drizzling melted butter on it. Some prefer this method, but to each his or her own.

Here's my way: I use ONLY fresh lobster meat. You can order lobsters pre cooked. Bring them home, pull the meat out of the shell, and let it cool a bit. PLEASE don't use prepared lobster meat, frozen or otherwise, unless it's actual recently pulled meat from the deli counter (you'll know because it costs about $30 a pound!) I put enough lobster meat in a bowl for 3-4 lobster rolls (meat from 2 "chick" lobsters or 1 1/4 pounders should do). I put a little chopped celery in. I like the texture and the flavor of a little celery, some purists would argue. Dice it very fine though; you want a little flavor and a little "background" crunch, and the celery will "compete" wtih the lobster if it's cut too big. Try it both ways. I put the tiniest amount of mayo in and mix it up. Usually a half a teaspoon does it. JUST enough to coat it. Then I butter and pan fry my buns. This gives yet more flavor and character, vs. just toasting or using raw. By the way, I use Veganese soy based mayonaise. It has a milder flavor, but is still passable as mayo, in my opinion.

A recent contributor, Judy Navelski, adds:
I like butter only on hot lobster. (MeLobster concurs) If I am having a lobster roll, I want mayo. The hot butter tends to make the roll soggy. Also, cut up the lobster to more bite size pieces. Having a whole claw on top doesn't cut it. Not for easy eating anyway. use some of the water inside the claw to thin the mayo. Hellman's or Best or Trader Joe's. This helps intensify the lobster flavor. Let the mayo and lobster juice sit for awhile. Or mix it with the lobster and let that marinate in the fridge. If you are adding celery, you have the benefit of the lobster flavor wrapped around each piece. Also helps with adding less mayo.

I would add to this that if you're thinking of ordering a lobster roll at a restaurant, ask if it's all claw meat or if they add some tail. Personally, I think it's unacceptable to serve a lobster roll with just knuckle & claw meat. Many restaurants, even coastal ones, use frozen knuckle and claw meat vs. fresh meat from a recently shelled lobster. It's like the difference between a bottle of refrigerated wine from 7-11 and a $700 bottle of first growth Bordeaux. I would go so far as to say that a lobster roll made from frozen knuckle and claw meat is NOT a lobster roll, per se. It's completely different in both texture and taste. It's a little watery, and much of the flavor has been lost through freezing and thawing. Freshly shelled meat, especially tail meat is an entirely different texture and adds chewiness and character to the roll. Another thing is that I don't want any rolls other than the traditional "hotdog" roll. It has a mild bread taste that doesn't overpower the lobster like a sourdough roll or something else frequently used in hotels. At home, I use Nature's Own ™ hot dog rolls OR hamburger rolls. Hamburger rolls can be a little more forgiving to work with.

Read our Lobster F.A.Q. page to read answers to many questions about Maine lobsters, and find more lobster information than you would ever expect in one source.

Visit our lobster recipes page for a nice, but not overwhelming selection of hand picked lobster recipes, including a recipe for the BEST lobster roll in the world!

Learn where to BUY Maine lobsters, how to cook them on another page...and how to eat them on yet another! And because we're online, you won't have to worry about getting lobster juices on the pages!

And if you're intrigued about what advertising on our super high traffic site will do for your lobster or seafood related business, visit us here.